Home Blog Blast from our Past Presidents: ’70s Edition 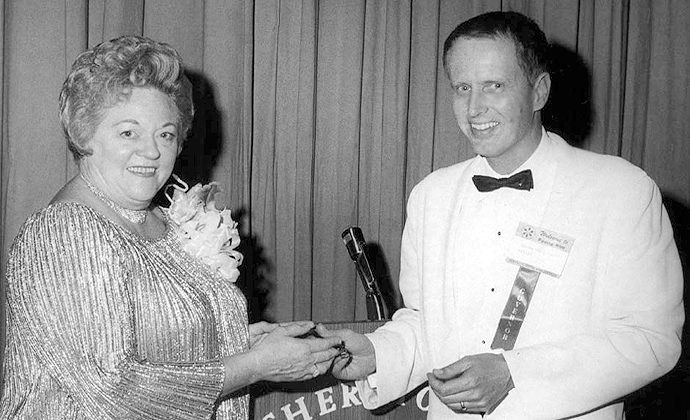 This year, HFTP is excited to celebrate 65 years!  In commemoration of our milestone anniversary and rich history, we decided to share memorable stories given to us from our past presidents who served in the 1970s. These anecdotes reveal some of the challenges the association faced during that time, the changes they inspired, and the new trails they blazed more than 40 years ago. “The first convention I attended was Miami Beach in 1960. My work experience had been as an internal auditor for Pan American World Airways. After five years of traveling around the world and four children, my wife decided that I should find a job that would allow me to be home with the family. So I applied to Intercontinental Hotels (at that time completely owned by Pan American) and  was assigned to the San Juan Intercontinental Hotel. It so happened that this hotel had a gambling casino, which they operated.

“As a consequence, at the convention, I was looking for help relating to hotel and casino accounting. One of the sessions was devoted to a revision of The Uniform System of Accounts for Hotels. In open forum, I suggested that a casino department with appropriate accounts and account explanations be incorporated in the book. Well, this caused an outrage, and I was derided for having even brought such a word as casino in that august body.

“How times have changed! In 1976, I was invited to work with a distinguished group of accountants to participate in the writing of the seventh revised edition of The Uniform System of Accounts, wherein a casino department was included.” “A couple of days before I was to be installed as incoming secretary, Claude Lilly informed us that our first president, Fitz (Charles F. Fitzsimmons, CHAE) had just died. Unfortunately, he had been our only office executive from inception. A couple of months later, Kay Goodwill arranged for us to interview and hire Harris Mitchell. Mitchell’s business performed services for many hospitality associations.

“I was installed as president on my 44th birthday, September 25, 1971. At that time, I believe I was the youngest to be president. Since then we’ve had other young presidents. During my presidency, I hired David Arpin of the Florida Hotel/Motel Association to replace Mitchell as office supervisor. In turn, Arpin hired Fran Tally, a journalist, to perform all the paperwork, including publications. Arpin resigned at the end of my term, but Tally continued working for us. My boss would fly me several times that year in his twin-engine airplane to our Jacksonville, Fla. office, so that I could work with Arpin to help teach Fran what needed to be done. Many times, Fran had to hold up to making her paycheck as the funds would be too low. In those days, the chapter collected the national dues for us, and so, the checks would not come in a timely fashion! We had to call the chapters for help to forward the dues more promptly. It was rough then.” “I had 40 years of service with Westin Hotels and I can truthfully say that my involvement with the association, locally and nationally, was one of the most satisfying experiences of my career, especially the years that I served as a national officer. My year as president was an interesting one for me — one that brought a lot of satisfaction, new experiences and a host of new friends.

“I served as the 20th national president, and the association had at that time 1,300 members representing 30 chapters. This included chapters in Australia, Great Britain, Holland, Jamaica and the Philippines. For much of the year in my presidency there was a budget crisis. To maintain liquidity, we had to borrow from the scholarship fund to pay the executive secretary’s salary and office rent. A dues increase finally put the association in a solvent condition, and we finished the year with a couple of thou in the bank and repaid some of our debt. It was nice to finally report at the end of the year that our expenses did not exceed income.

“Also, during my year as president, a concentrated effort was made to modernize the constitution and bylaws. Proposed changes adopted by the Board of Governors at the national convention helped make our administrative process much more functional and gave greater latitude for association growth.” My year as president began in Los Angeles, where Bill Ellis and his team put on a wonderful convention. I remember very well sharing the stage with Lee Brown (and his renowned band) when I made my acceptance speech. I am a Canadian and so I was the first non-U.S. president. It was the year that the association became international. I certainly remember the effort it took to put on the convention in Toronto and it was surely worth the work. I do believe that everyone who attended had a great time — for many, it was their first visit to Canada.

“Another area of influence that I had was that, together with Larry Chervenak, I helped organize the first computer users conference (now known as HITEC). Therefore, I can legitimately claim to be one of the ‘Fathers of HITEC.'”