Home Blog Blast from our Past Presidents: ’80s Edition 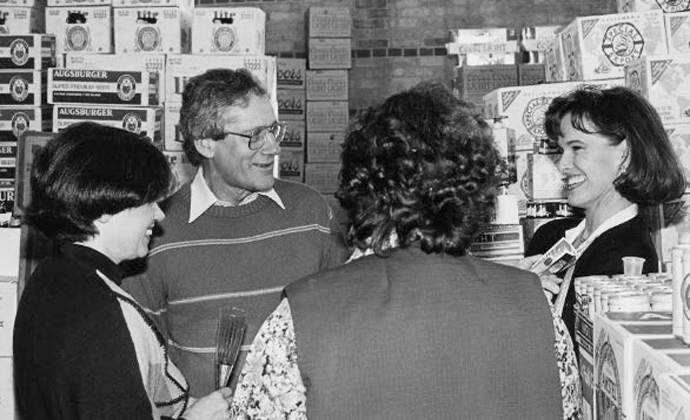 This year, HFTP is excited to celebrate 65 years!  In commemoration of our milestone anniversary and rich history, we decided to share memorable stories given to us from our past presidents who served in the 1980s. These anecdotes reveal some of the obstacles they prevailed over, people they drew inspiration from, and goals they achieved more than 30 years ago.

When you asked me to reflect back to my year as president, I would have to say that my experience actually came from many years of involvement, not just that one year. As a young controller in the ’70s I had the privilege of being associated with the Diplomat Resort and Country Club. This property had over 1,000 rooms spread over 400 acres with multiple locations, two championship golf courses and enough catering and formal seating to accommodate over 5,000 people.

“Tom Moore was the man that encouraged me to get involved in the association. Through his encouragement and the need to expand the role of the financial officer on the executive committee, I started down my 30-year road with the association. When the national convention came to the Diplomat in 1972, and my boss was not available for onsite support, I got to know firsthand how the association worked and who made it work.

“When I became comptroller of the Diplomat with multiple hospitality and commercial companies to manage, it was clear that my affiliation to the association would be invaluable to my success. At that time, the Florida chapter was just taking shape, and I ran for the South Florida chapter presidency. With the great support from the many young controllers in the area, we set out to build the computer users conference. This was more than just talking to vendors that we used. We also had established relations with Florida International University and many large properties in Florida. But it was clear to all of us early on that this was much larger than a chapter effort. What we had was a conference that addressed industry wide issues.

“After the success of the conference, my peers asked me to run for national office. After some soul searching and the blessing of my bride, I threw my hat in the ring and was elected. One of our first goals was to improve communication among the chapters and with that, we increased our national publication frequency.

“I then started to write a column each month to let everyone know the current direction of the national association. To reinforce our bond with the industry I spoke in 20 cities that year to AH&MA, NRA, CMAA and IAHA groups. With the continued growth and diversity of the computer users conference, our association and its members were getting well-known by national hotel companies. Myself and many others got involved with hospitality universities as speakers, mentors and as resources to help develop some of the first formal hospitality financial educational programs.

“We also went back to our original charter and revised The Uniform System of Accounts with the help of major financial officers that represented the hospitality industry. I spent nearly 20 years involved as either an officer or as the chairman of HITEC. This was an experience that shaped my career and gave me personal access to some of the greatest individuals in our industry. The many individuals that followed after my tenure with the association have never lost sight of the role that was established and now have nurtured this association into a well-rounded group that has become known as the acknowledged leader in technology education and a necessity for the modern controller to succeed in the hospitality industry.” “During my term in office, education and scholarships were one of my prime objectives. Of course, membership expansion was another priority. At that point, our membership was 1,249 persons. Having the computer conference in Dallas was a plus in raising membership; we gained by influencing the Dallas State Association to have all their chapters become full members of the national association. My signature was the first on CHAE certificates. My greatest honors were having a scholarship and endowment in my name, and the very prestigious Paragon Award. I am extremely proud to be a member of this great organization and will be active as long as you will have me.” “Eighteen years ago, I invited you all to a ‘Rocky Mountain High’ in Vail, Colo., for the 31st Annual Convention. Now, I have been asked to write a summary of my memories and accomplishments during my eight years on the Executive Committee. Well, as the old saying goes, ‘with age you lose three things… your memory, and… I can’t remember the other two.’

“Many things I have forgotten, but many more will never be forgotten. I will never forget the friendships that have remained all of these years. And, I will always remember the fun, the struggles, the excitement, the challenges, the teamwork and the accomplishments. During my presidency, we performed a long-range strategic plan that was mandatory for our organization to move forward.

“Most of the recommendations from the plan were accepted at the convention in Vail. My platform as president was to perform the long-range plan. My appointment of Sal Spano as the committee chair was probably my biggest accomplishment. Sal’s reputation and commitment allowed us to be honest about where we were as an organization and the difficult decisions that we really needed to make!

“The changes that came out of the plan included:

“As I look back, I know there were other accomplishments that were notable. Selecting the committee to revise The Uniform System of Accounts, for example. But it is probably more important for me to recognize those individuals that in my opinion made this organization for the first 50 years. “When I was asked to write a summary of my year as president, I struggled over where to begin. It was 1988, five years after I joined the Executive Committee. It was those five years that prepared me to be president in a year of transition and growth for the association.

“It was a great year as I witnessed the Executive Committee working together as never before, with a professional staff to make the difficult decisions that would lead the association into the future.

“Looking into my archives and reading letters that others wrote about me when I was nominated for the Paragon Award, I realized that 1988 was a great year. By then I had already put programs in place such as the President’s Honor Roll for sponsoring new members, the membership card, which we still use today, and the discounts for automobile rentals.

“The most significant change that occurred in 1988 was the overhaul of the Bylaws, Board of Directors and the election process. The Executive Committee realized that if we were going to move forward, the structure we had been trying to work with would not allow us to move fast enough into the future. The Board meetings before 1988 were basically for informational purposes only. With a Board of 62 members we could never really accomplish much. Sometimes it would take two years to get the simplest management issues resolved. Thus the Board as we know it today was formed. I was the last person to hold the title ‘Chairman of the Board.’

“Also during my year as president:

“I am very proud of my years spent on the Executive Committee. I have been privileged to work with some outstanding volunteers and professional staff.” “It was such an honor being the fourth president to hail from Las Vegas. I was preceded by Kay Goodwill (1968-1969), Neil Smyth (1969-1970) and Leo Lewis (1975-1976). Not only were their shoes hard to fill, but all the presidents who came before me had incredibly difficult jobs getting a fledgling organization off the ground. There was never enough money, at times, poor participation, a lack of adequate staff, logistics problems, and on and on. Thank God for Fran Tally!

“By the time of my tenure a lot of the major kinks were ironed out, which made every officer’s job easier. We had already moved the home office to Austin from Keystone Heights. We had undergone a name change, and were actually holding technology conferences each year. I can remember personally trying to recruit a long list of exhibitors via telephone in the early mornings before my workday started. It was easier to make contact with East Coast people at the very beginning of their day which meant getting up early and being at work sometimes at 6:00 a.m. I was installed at the Annual Convention in Orlando, which was where the outgoing president, Frank Santos, worked.

“Frank was tireless in his aim to make that convention the best ever, and it was. We had every kind of dynamic speaker possible and the entertainment was unequaled, as only Orlando can provide. Frank also broke tradition and had a sumptuous feast/party at his lovely home.

“The technology conference was held in the late spring of 1989 in Dallas. We were able to entice more national exhibitors than at any previous time. The highlight of that year’s conference, and perhaps of my entire presidency, was the creation of the Technology Hall of Fame for individual leaders who had greatly contributed to this segment of the hospitality industry. That first year four dynamic people were inducted for their contributions. They were Larry Chervenak, CHAE; Raymond C. Ellis Jr., CHTP, CHE and Carrol Lund. Without those four, our technology conferences may never have been successful. The traits that all of them shared were an incredible sense of humor and a tenacity to see the job done.

“I can never thank Leo Lewis, Alice Banks and Frank Santos enough for talking me into running for national office. (Does anyone still have those t-shirts saying ‘Best of the West’ that I handed out in Boston?) I had the greatest support staff of officers, and without them, I’m sure I would have failed. Yes, it was a lot of work and there were times I wanted to run screaming into the night, but I wouldn’t have missed any of it for the world.”