Home Blog Blast from our Past Presidents: ’90s Edition 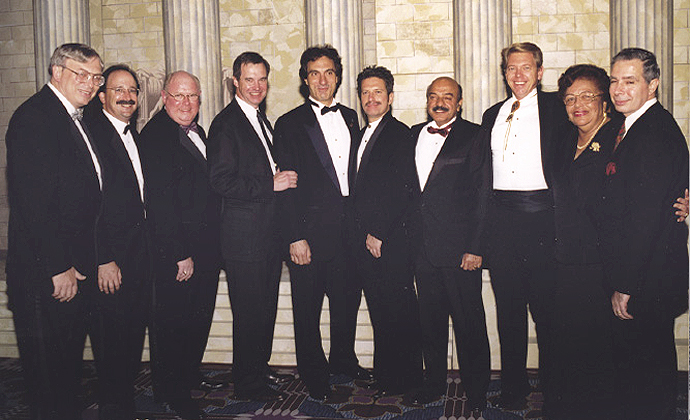 This year, HFTP is excited to celebrate 65 years!  In commemoration of our milestone anniversary and rich history, we decided to share memorable stories given to us from our past presidents who served in the 1990s. These anecdotes reveal  some of their ground-breaking achievements, the valuable lessons they learned, and the ventures they led more than 20 years ago. “I believe that the six years I had the honor of serving the association at the executive c ommittee level were the most exciting times in the history of our organization — dramatic changes were crucial to the association’s ability to survive, much less thrive. During this period, the entire IAHA leadership and the new professional association management staff rose to the occasion, resulting in fundamental changes, which laid the solid foundation for our current success and prosperity.

“In my opinion, the most far-reaching change in the history of the association took place during the summer of 1986. IAHA hired Barbara Byrd-Lawler as the executive vice president. Occasionally, I have been credited with (or accused of) moving our offices to Texas. That is true — I personally loaded all the association’s belongings into a U-Haul truck and drove it from Keystone Heights to Austin.

“However, there were two reasons for the relocation. Primarily, Austin is a major association city (and we didn’t have any reason to be in Washington D.C., New York or Chicago). Second, the practical matter was that Barbara lived in Austin. In 1986, the association was almost out of money and we simply could not afford to relocate both the association and Barbara.

“During the next four years, the Board of Directors, Executive Committee and the IAHA staff, under Barbara’s expert and enthusiastic direction, developed and executed many significant changes. IAHA’s finances improved significantly as a result of the growth in HITEC — we went from practically no money to $1 million in the bank. Also, the Hospitality Technology Hall of Fame award was established in 1989 to honor the pioneers of hospitality technology.

“During this period, the association installed new computer systems, improving membership recruitment and retention. The Bottomline became an award-winning publication. IAHA was recognized not only in the hospitality industry, but also by other associations as well. We had arrived as a professional association.

“Looking back at all of this, there is one common underlying factor — CHANGE. I am very proud of having been an active participant in this time of major transition for our association. I feel very strongly that active support of and participation in a professional organization is not a volunteer activity; it is a part of our job and responsibility. Most of us (accounting types) are not natural joiners. We need some encouragement in order to get actively involved. During my Westin days, many of us felt the ‘unwritten rule’ to participate in IAHA due to Bill Ellis’ presence and past presidency. As vice president of hotel accounting for Mariner Corp. (although not yet an officer of IAHA), I scheduled my property visitations with the local chapter meetings in mind — as an encouragement for my controllers and assistant controllers to volunteer for committee assignments and leadership positions. As a direct result of this, one of my proudest IAHA moments was at the Annual Convention in Washington D.C., where six of my former Mariner controllers or assistant controllers attended as presidents of their respective local chapters.

“Ladies and gentlemen, we are no longer just a small group of hotel and club accountants. HFTP is truly an international professional organization, of which all of us can be very proud and glad to participate as members.” “The following are some of the highlights from my presidency: “My year as president started off on a great note right at the officers installation in San Antonio. My first duty as president, just after Alice Banks installed me, was to award a very special scholarship in Alice’s name. This had been approved at the board meeting and was unknown to Alice until I asked her to remain on the stage with me for a special presentation. Alice had given me my first opportunity to be a chapter officer in Washington D.C. and it was an honor for me to present her this scholarship just moments after she installed me as president.

“During my year as president, the board of directors for the first time conducted an all day strategic planning meeting, formulating the groundwork for the future growth and success of the association.

“The conclusions from the meeting were to increase membership with better marketing, increase chapter support, and create a resource database. Another specific objective was to build strong and lasting relationships with related industry associations. Also during my year as president was the establishment of a scholarship in Larry Chervenak’s name, the recognition of the first group of CHTPs, and the association’s first venture into the Internet with the introduction of IAHANet, a precursor of many things to come.” “During my year as president, we focused on exposing the association to the CFOs of the industry by sponsoring two CFO Forums. That same year we implemented the name change to include Financial and Technology versus Hospitality Accountants.

“We also restructured the board by establishing an executive committee-appointed board position each year, and eliminated regional board positions, so that the association could attract the best candidates regardless of geographical location. Last, I probably was the best dancer of all the past presidents!” “First of all, I am most proud of the first educational endowments made from the Foundation to the University of Houston (later tied to the Alice Banks, CHAE, Scholarship) and the one to the University of Nevada Las Vegas. Both were the first grants to be made by HFTP to an educational institution and were in the amount of $25,000 each. This was the culmination of the efforts of a large number of prior officers and directors and I was extremely proud to be able to say I made it happen (with a lot of help from Frank Wolfe and others).

“Second, I was proud to continue the executive committee’s goal of expanding the association and renaming it to include Technology. We won the right to bring to the association the ballot to change the name at the Calgary convention. The name change assured that we would exceed the 4,000 members we had achieved during my tenure. There were a number of other items, routine matters for the most part. But these other items were a culmination of nine years of dedication through my progress from a Board member to my leadership positions on the executive committee. And that had more of a lasting impact than I could have ever hoped for. I was a party and contributor to some of the most dynamic changes our association has ever made. There were many contributions by a steady profusion of our committed members and I am very proud to have shared the vision, effort and success along the way.

“I started with four years on the board of directors, and five years on the executive committee. I was a part of Jaakko’s 1987 committee that wrote the bylaws that changed our association forever. I was witness to the maturation of the association and its leadership to its current status. I was part of the planning and execution of establishing our association’s educational prowess with seminars and leadership conferences. I watched and participated in the extraordinary growth of HITEC.

“But despite all of these accomplishments and hard work, I remember most the friendships I made and the wonderful times I had representing the association and its members. Recently, I dug out some old files and found some letters from friends congratulating me on different positions I held. It brought back a lot of great memories. All in all, I think looking back at it, it is awfully hard to just look at one year of service. So much happened all along the journey that I had a hard time separating the memories.

“But I am extremely proud of those first two grants, a culmination of a lot of efforts. I think the thing I am most grateful for is that I was there and contributed. Standing up and being counted is such an important part of being a volunteer and we made a difference.” “Becoming president was a culmination of years of active participation, beginning with the local chapter on up. I owe much of my involvement to my fellow colleagues, men and women (well, mostly women — yes, you Kathy) who supported and encouraged me all along the way.

“From serving on the executive committee, I cherish the friendship and camaraderie of my fellow officers: Buddy, Michael, Howard, Jeff and Fred. Those years were a special time for the association. Frank Wolfe had just taken over as executive vice president and you could sense that our association was energized and was about to experience a tremendous growth spurt. Frank had and continues to (with the able-bodied staff) advance the strategic goals of our association.

“As the first club HFTP president, I represented the emerging club segment as total club membership was increasing and club chapters were on the rise. To take credit for any highlights or low lights would diminish the global team-oriented approach all of the officers and board members demonstrated.

“I hope my presence has motivated other individuals to step up and contribute to an association that continues to promote programs and benefits that increase our personal and professional growth. I also credit all of the past presidents, who during some very difficult periods had the strength and perseverance to carry on, enabling all of us to share in the fruits of their labor. Past and present, I am proud to have my name alongside so many distinguished presidents.”