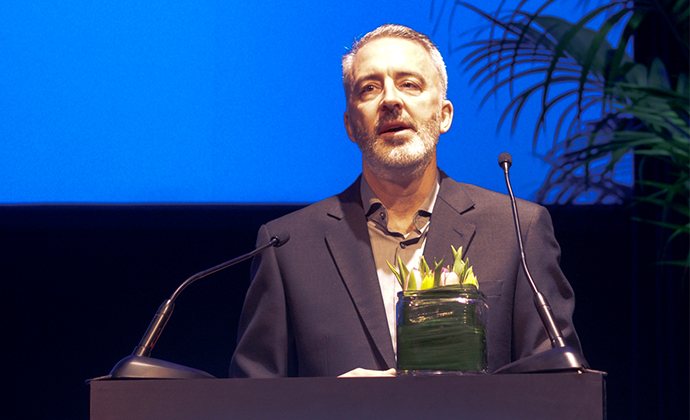 Carson Booth, CHTP’s invaluable contributions as chair of the HITEC Amsterdam Advisory Council and the overwhelming success of the inaugural HITEC® Amsterdam that took place earlier this year earned him the distinguished 2017 President’s Award. The annual HFTP President’s Award is an honor selected and presented by the outgoing HFTP Global president and recognizes a person who has made a significant contribution to the success of the association through the course of the year. This year, 2016-2017 HFTP Global President Lyle Worthington, CHTP bestowed the honor to Booth.

Booth was integral in helping HFTP exceed its goal to successfully produce a European counterpart to the recognized, 45-year-old North American HITEC event. The first-ever HITEC Amsterdam was held from March 28-30, 2017 at the RAI Amsterdam Convention Centre. More than 1,100 hospitality industry professionals from around the globe gathered there to explore the industry’s best practices and latest innovations. The event featured 30+ educational speakers and two keynote presentations, as well as an exhibition hall that was home to 83 exhibit booths showcasing the latest in hospitality technology products and services. Based on this year’s successful show, HFTP has already scheduled HITEC Amsterdam 2018 for April 11-13 at the RAI Convention Centre. ooth is a startup tech consultant and former global vice president of property technology at Starwood Hotels & Resorts Worldwide, Inc. He has more than 25 years of hospitality technology experience and holds a bachelor’s degree in computer science with a concentration in business management from the University of Nevada at Las Vegas. He is a frequent speaker at industry events, previously served on the Hotel Technology Next Generation board, and is a past director on the HFTP Global Board.

“When I was asked who I wanted to give the President’s Award to, Carson’s name was the first and only that came up,” Worthington said. “Thanks to his hard work, commitment, passion and expertise, HFTP’s first HITEC Amsterdam was an unbelievable success. Carson worked tirelessly to rally the troops, build a CIO session and panel, organize speakers and get startups organized for E20X. And most importantly, he helped make HITEC Amsterdam a truly European conference. I’m proud to know Carson and honored to recognize his contributions to HFTP and the hospitality industry.” Booth’s contributions to the industry and the association are widely admired by many of his colleagues, including HFTP Global Treasurer Michael Levie, CHTP and HFTP Director Derek Wood.

From Levie, “When some of the absolute greatest star players of a sport are interviewed about their incredible performance, making it happen when it needed to earn the championship, and inspiring the team to rise above their imagined ability, their answer is always humble, calm and friendly: ‘the team made it all happen, I was glad to be able to contribute and was lucky to make the winning goal.’ The result is that these star players inspire us to do better, lead and push ourselves to that next level. That is Carson Booth to our hotel tech community and to HFTP specifically. What a deserving President’s Award choice.”

From Wood, “Carson Booth has been at the forefront of technology for the last 15 years. He has guided Starwood Hotels to become one of the leading hotel chains with regards to technology. His leadership within HFTP has inspired many that follow, both with his vision of the future as well as his entertaining and informative public speaking. He is without doubt one of the current icons of our industry, and it is my honor and pleasure to have worked with him, and to call him my friend.”

After receiving the President’s Award, Booth expressed his gratitude and thanks for all of the support he received from the organization and his colleagues, especially the HITEC Amsterdam Advisory Council.

“I am honored to receive the 2017 President’s Award as recognition of the success of HFTP’s inaugural HITEC Amsterdam Conference this year,” Booth said. “My personal support of HFTP remains deeply rooted in the organization’s commitment to delivering world-class education, conferences and networking opportunities for the industry.

“I would be remiss not calling out the amazing support of our advisory council members who volunteered their time to identify relevant European topics and speakers for Amsterdam’s educational sessions, in addition to the support from our industry partners and the entire HFTP team to organize the conference. It is clear that the industry is seeking consolidation in the hospitality technology conference space. HITEC Amsterdam’s entry into Europe has built upon the trusted HITEC brand by exceeding expectations on all metrics, firmly solidifying its leadership position as the brand continues its global expansion.”