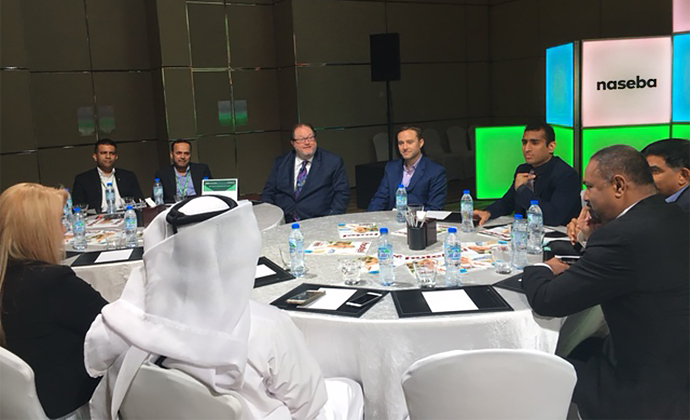 It seems like every time I visit Dubai something changes. Whether it be a prodigious development, a broken record, a new restaurant, mall or even airport opening – it is difficult to keep up with the city’s massive scale and growth.

Last year I visited Dubai for the first time, and chaired Naseba’s Hotel Technology Summit at the beautiful Sofitel Dubai The Palm Resort & Spa – it was also HFTP®’s first event in Dubai. I immediately recognized the need, from an educational standpoint, for HFTP in the area. The city hosts technology conferences, but lacks an option for year-round education, networking, social events and problem solving meetings for both the finance and technology industries. HFTP is the only global association that provides its members these annual benefits.

Dubai continues to vastly grow and change, but since my last visit, HFTP’s presence in the United Arab Emirates area has grown immensely. This past November, HFTP co-hosted Naseba’s 20th Annual Hotel Technology Summit that took place November 16-17, 2016 at the Park Hyatt Hotel in Dubai, UAE. I again represented HFTP Global at the summit, and served as the event’s chairman. I was thrilled to reveal two big announcements onsite at the event:

After co-hosting this year’s summit, HFTP additionally welcomed over 20 new members to its Dubai Chapter. In one short year HFTP has flourished in the Middle Eastern market, and I could not be more proud. Dubai is a region that is rapidly growing, changing and innovating within the hospitality industry. HFTP’s recognized presence in the area now connects that region to the association’s existing, global network like never before – this not only helps HFTP’s members all over the globe, but it helps the entire hospitality industry at large.

The 20th Annual Hotel Technology Summit was another great success. Perhaps my two favorite moments both involved Nancy Wolff, vice president of hotel systems at Jumeirah Group. In her keynote presentation the first day, she really pushed the envelope on emerging technologies and the need to be focusing on them today – (“Are blockchain and chat bots on your radar? They should be!”). The second day Nancy sat on a panel moderated by HFTP Global Immediate Past President Arlene Ramirez, CHAE, CHE, MBA, CHIA that discussed women in finance and technology, which was an amazing stereotype-breaking moment to witness in the Middle East.

With another great show in the books, HFTP Global now turns its focus to the next Dubai journey: the inaugural HITEC Dubai next Fall. It is truly hard to describe Dubai and its entirety to someone who has not visited the city before. The best way I can try to describe the remarkable and lavish destination is to note that it is what I fantasized a city of the future would look like when I was a kid. Add a trip to Dubai to your bucket list for sure – and I would recommend looking at November 2017 as the perfect month to visit.

Lyle Worthington, CHTP is the 2016-2017 HFTP Global president. He is CIO at The Student Hotel, and is also a frequent speaker at HFTP Global events.

About the Author: Lyle Worthington, CHTP