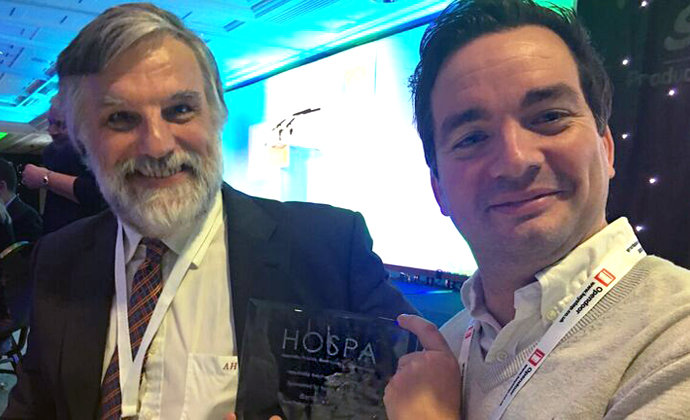 HOSPACE 2017, Hospitality Finance, Revenue and IT Professionals’ (HOSPA) Annual Conference and Exhibition, was held at a new venue in central London on November 2 of this year — the newly refurbished Lancaster London — and so an interestingly new experience for this author (who used to run this event for 10 years) right from the very front entrance.

HFTP supports and sponsors HOSPACE, and has done so for the past 11 years, and so PineappleSearch® was featured behind the main podium at the event. The new location and areas were bright and light, with the main exhibition hall upstairs in the Nine Kings Suite.

The conference sessions themselves were downstairs in the Westbourne Suite, where the room was wider, yet had lower ceilings than previous locations — but this leant a slightly cozier atmosphere to the proceedings.

Unusually, the event started with a human resources session with HR directors from the Savoy, Dorchester and Jumeirah. The panelists discussed data and human resources, and gave some interesting insights that effectively suggested people still needed that human touch, although the data can be very helpful. There was an interesting aside on staff/people and depression that appears to be becoming more of an issue.

Brexit (the exit of Britain from the European Union) was discussed following the debate from the same panel last year. The start of this session was introduced by John Guthrie of the British Hospitality Association (BHA) which dealt with the government for the United Kingdom industry. John introduced the phrase “cliff edge” with regards to a hard Brexit, which would immediately put pressure on the staffing issue, especially for the third largest industry in the UK in terms of employment. He was effectively saying the UK should aim for a graduated Brexit rather than a “fall off the cliff edge” when the time comes.

Ted Horner, a former director on the HFTP Global Board, chaired a session on IT cyber threats; and Ally Northfield, HITEC Amsterdam Advisory Council member, chaired a panel on the thorny subject of “ever-changing dynamics of the OTAs.”

Also, past HFTP Global director and HITEC Amsterdam Advisory Couuncil member Ian Millar, senior lecturer of IT at Ecole hôtelière de Lausanne, participated in a fascinating panel with his father James Millar who is assistant food and beverage manager at the Royal Lancaster. The two shared memories of the hotel opening with the hotel’s current manager, Sally Beck, in a charming session called “50 Years Apart.”

The workshops and education sessions were all well attended. Alvaro and I produced a packed session on GDPR and its impact on hospitality, as well as what HFTP’s GDPR/DPO Task Force is doing for the industry. We received many compliments and much interest on the topic of this particular course. We met many UK and European vendors at the event interested in joining HITEC Amsterdam, HOSPA members interested in joining HFTP, and some vendors who are members of both organizations. Discussions centered around PineappleSearch, GDPR, and especially HFTP’s Certified Hospitality Technology Professional (CHTP®) designation. There were numerous nominations in each category. Fantastically enough, sitting right next to the author was HFTP member, HITEC Amsterdam Advisory Council member and the winner of the IT Inspirational Leader Award, Barry Thomas, CHTP, IT Director of the Rosewood London and Europe — which was very popular on social media, especially LinkedIn and Twitter, over the next few days.

HOSPACE had a real “buzz” about it all day, with clearly much networking and debate on the issues within hospitality finance, technology and revenue management.