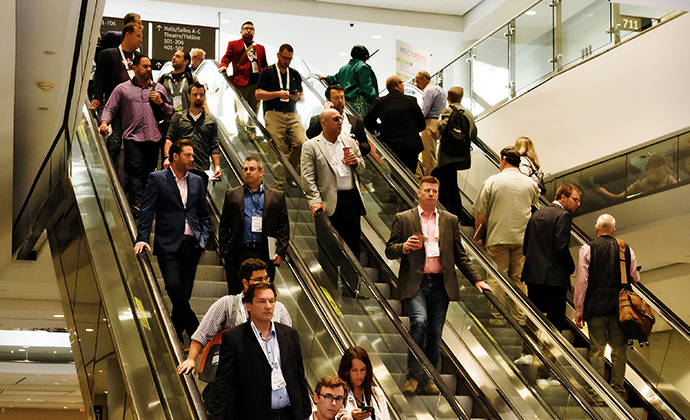 Another HITEC down, and it may have been one of the best yet. “O Canada” how you impressed me! I must admit I had my doubts on what level of turnout there would be, with potential hassles of passports, border crossings and foreign transaction fees. What I did not expect was the ability to dodge all rain storms, because of the genius design of The Path, which allowed me to walk almost anywhere staying inside. I did not expect to pose with the Art Ross and Calder Trophies from the NHL Hockey Hall of Fame (I was ok that the Stanley Cup was off visiting with my beloved Pittsburgh Penguins). And I did not expect to turn in the HITEC Toronto exhibit hall to see a whole peninsula of additional vendor booths just as I thought I had gotten through all of the aisles!

After I was able to break free from the scheduled meetings I had coordinated before my arrival, I tried to seek out the “gems” of the show. The major themes for me to investigate were around mobile check-in, secure payments and driving direct bookings. I did spend some time talking with first-time attendees, as well as exhibitors to get their perspective on how powerful HITEC has been for them and how likely they are to return next year for HITEC Houston.

Farr Shepherd, president of Decypher Technologies shared his insights with me after the show last week. “We had some really great conversations at HITEC Toronto, and enjoyed our first year exhibiting, so we will be in Houston next year. I would suggest that first-time visitors to HITEC fully explore what all the vendors are offering, because you might not be aware of all that they do. The exhibitors are there because they are the best in the business and are experts in their fields, so take the time to visit. Small talk on the expo floor can also lead to some good conversations.” I was happy to hear his positive feedback. I know this show can be somewhat expensive to attend for smaller companies, but it is great to know it really can have an invaluable return for them. And I agree with his comments. I found at least five companies whose product offering went well beyond what I thought they did.

I caught up with Ed Gormbley, managing partner at Workforce Partners, LLC who owns hotel properties in Fairfield, Connecticut about his insights as a first-time attendee at HITEC Toronto. He mentioned that while he has been to many conventions like HITEC, this was the best one for free time. “It was well organized overall. Good speakers interspersed with good floor time and lots of free time to mingle. Walking the floor was great. We found some companies that we did not even know about that reminded us how many options are available in the industry.” He advised there is a high probably he will return for Houston next year.

As I was looking for some solutions to help with my initiatives to drive more direct bookings, I had an opportunity to speak with first-timer Christos Perakis, co-founder & CEO at Zoottle. Christos reached out to me before the show started to schedule a meeting so I could learn more about his intuitive ways to collect more guest e-mails, intercept bad reviews and take action, and provide upsell opportunities to guests while onsite. As attendees, we receive an overwhelming amount of e-mails before HITEC from vendors wanting to schedule meetings. My feedback to exhibitors is to keep the e-mails friendly and brief, and easily describe what you do and why I want to talk to you. Chris did exactly that, and it was one of the e-mails I responded to. I was happy I did and that I was introduced to his organization. Canada, I was sad to leave you, but I am looking to kicking up my heels in Texas in 2018! #HITECtor #HFTP

ennifer Jones is president at J2 Hospitality Solutions, a technology consulting firm, and is an official guest blogger for HITEC Toronto. She is an active member in the HFTP Rocky Mountain chapter, and she has spent her entire career in the hospitality technology space on both vendor and property sides of the spectrum. Jones is a 1997 graduate of Penn State University’s School of Hospitality Management. Contact her at jj@j2hospitalitysolutions.com.