Home Blog What I Learned at HITEC Toronto 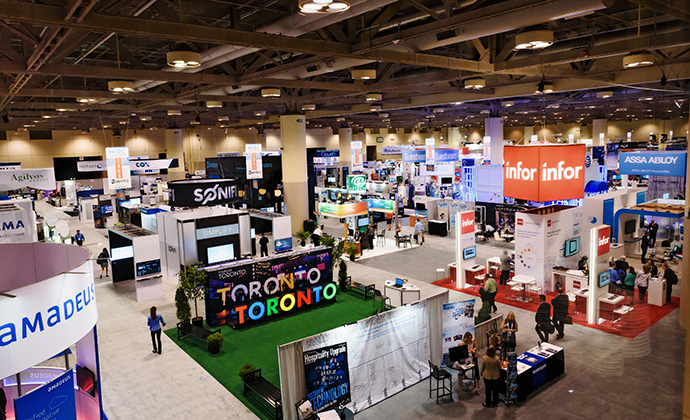 Confession: I can not stop playing with the fidget spinner I picked up at the ALICE booth.  My wife, a well-known “anti-fidgeter” (ask my kids), rolled her eyes when she saw it come out of my HITEC Toronto swag bag.

Correction: In my previous blog post (HITEC Toronto: Our Story Thus Far), I mentioned the “sunset over Lake Erie” as seen from the CN Tower. My gentle readers are either all too polite – or slept through geography – because Toronto is on Lake Ontario, and the lake is southeast of the city – not southwest – so it was technically “sunset over Kitchener.” It was lovely, nonetheless.

Apology: I apologize to the vendors whose parties I missed, and I thank you for your invitations. I am sure they were a blast, and I trust they were well-attended without me. Toronto rush-hour traffic was a challenge in getting to-and-from the earlier events if they were more than a mile from the Metro Toronto Convention Centre, and a sore back prompted me to skip the late events. I am going to step up my training regimen for next year’s HITEC Houston with a combination half-marathon/pub-crawl!

Acknowledgement: Thanks to the HFTP team for making HITEC the most important event in hospitality technology, and for advancing the bar every year (and for selecting me to doodle about it). This year marked the 45th anniversary of HITEC, and it was the largest, best-attended HITEC ever (read the final details press release here). Also, special thanks to the HFTP executive committee, HFTP International Board and HITEC Toronto Advisory Council – volunteers all. Now, on to the main event – my HITEC Toronto wrap-up. This year, I managed to cover the entire show floor at least once, and to visit almost every vendor that I had on my pre-show list. This was greatly facilitated by using the new HITEC 2017 app, which let me browse all the exhibitors and easily star my choices into a “favorites” list. I only wish that the app let me sort by booth number, as I found myself having to backtrack a few times. Based on my overall experience – show floor, E20X start-up pitch presentations, educational sessions and social events – I am happy to proclaim that the state of our industry is good!

Here are some reasons to be excited, in no particular order:

Innovation is alive and well. I previously touched on some of the concepts I saw from the E20X Toronto contestants; my fellow HITEC Toronto guest blogger, Jennifer Jones, went into more detail in her recent post (13 E20X Pitches and One Home Run). Congratulations to E20X Toronto Judge’s Award winner Stay Wanderful. Guest engagement and experience is clearly driving innovation, with nine of the 13 E20X Toronto competitors having products in this category.

The other four were all about generating more bookings, more ancillary revenue or more profit. Lots of great stuff to make the hotel more inviting AND more successful. The most entertaining E20X pitch presentation, in my honest opinion, was by Angie Hospitality, a voice-activated in-room request, control and communications center. Ted Helvey, CEO at Angie Hospitality, designed his four-minute pitch as a conversation between him and his British-accented AI. Speaking of which… Artificial Intelligence (AI) is increasingly important. Angie was just one example of a growing category of products that promise to bring the voice-activated AI to your guestrooms. Some are based on off-the-shelf AI platforms such as Amazon’s Alexa or the Google Assistant, while others are more closely tailored for the guestroom application (even if they use one of the major AI engines under the covers). By definition, AI is way more than voice commands. My 2007 car has voice command capability for the audio, navigation and hands-free phone functions. With voice-command, you must use the correct command with the correct syntax.

A well-designed AI can have a conversation with you. We will call our hypothetical AI “Jeeves.” If I say, “Jeeves, I am hungry,” then Jeeves could respond with “Would you like to order room service, or hear about other dining options?” I might then ask, “What is good from room service?” and Jeeves would then say “The signature bacon bleu-cheese burger is a popular choice. It features locally-sourced fresh ingredients including house-cured bacon. Would you like me to add it to your room-service order?” I then might say, “No, I feel like going out. Is there a good Thai restaurant nearby?” Jeeves would respond “Thai Temple is highly-rated on Yelp, and is only four blocks away. Would you like me to make a reservation?” You get the idea. This type of technology will be increasingly common in our homes, and guests will increasingly expect it in hotels rooms. AI is not just for voice-activated assistance and controls. There are a growing number of AI products that use SMS text messaging as the communications medium. Same concept, just geared toward that segment of the market that is more comfortable texting than talking, especially around other people.  This medium is also better suited for hotel-initiated conversations. Having the room start talking to you without prompting could be…creepy? Casting – using the media apps and services already installed on our phones and tablets to control streaming to the guestroom television – is rapidly becoming a part of most entertainment solution providers’ offerings, most based on Google Chromecast. Almost every television solution exhibitor I visited had a casting solution, either integrated into their product, or as an add-on. No app is required, and the pairing process is easy. Fire up an app such as Netflix, Hulu or YouTube, and hit the “cast” button. I tried it with my old-ish Samsung Galaxy Note 3, and it worked like a charm; it is not “mirroring,” so you can continue using your device once you have started casting.

As with any technology, the devil is in the details. Google puts out frequent software updates, and the device is unavailable while updates are being installed. Some providers manage this process so updates only occur after checkout. Others do not. I am eager to see how the solution holds up in real deployments over some time. I could keep going, but Microsoft Word says I just hit 1,000 words (a bit over my target). I also saw fabulous new television and digital signage products, cloud-based phone systems, expanding alternatives for CRS, PMS, POS and everything in between. Also, plenty of secure payment solutions incorporating card data tokenization and point-to-point encryption, which if you had on all of your payment applications you would be at almost zero risk of a credit card data breach. Just saying.

Thanks, HITEC Toronto. See everybody next June at HITEC Houston!

Ron Hardin is principal at RonHardin.TECH Consulting, and an official HITEC Toronto Guest Blogger for HFTP Connect. Contact him at ron@ronhardin.tech.